The Enquiry – Evaluating the Opportunity the Kipling Way

TALES FROM THE ROAD 51 – GUT FEELING IS NOT A MYTH

Few of us in our working lives will not have listened to sales people banging on about their ‘gut feeling’, that feeling of certainty from within, and we have all seen the results of the ‘gut feel ‘ both gone good and gone bad. However, it isn’t a matter of luck, but an instinct can be very strong and remarkably accurate, stronger and more reliable with years of experience.

This account of the recent appointment of a Canadian distributor for one of our clients is based on a very strong gut feeling I had, and four months on I think that feeling is being borne out. My first contact with the company followed an OMIS (Overseas Market Introduction Service) report commissioned by my client with UK Trade & Investment, Toronto, during the summer.  The report provided a list of about 20 potential contacts, with about half having expressed immediate interest. Having seen large numbers of such reports over the years, and commissioned several in my own working life from the days when they were called Tailored Market Information Reports (remember the TMIR?), I generally work on the rule of thumb that it is often the companies who are too busy to show interest who are actually the ones you need to speak to.

My client’s new distributor was on the ‘Awaiting Response’ list, and after several unsuccessful attempts by the Commercial Officer to engage with them, I decided it was time for a direct approach and after a brief email exchange arranged to speak with them by telephone. It’s often the best way, and there were a couple of other pointers that led me to that decision: first they already successfully represented another UK company who is known to me; second they operated in a business area that was specific to my client’s requirement. There is also the simple point that for a company who has never heard of you to consider representing your products, they will want to know more about what the product can do than can properly be explained by an intermediary. They are likely to want to talk with someone with direct technical knowledge, experience of selling to certain customer profiles, to learn about new opportunities outside their normal business reach, and to have some knowledge of their customers’ businesses. Talking the same language, if you like.

It is also very easy in this age of the Internet and Social Media to communicate without actually talking, when a telephone conversation is both the best, and often the preferred way, through which our customers like to be approached. The warmth of a human voice, and the knowledge and experience that can support its words, has far more powerful an impact than a series of emails, chat messages, or social media postings. The OMIS did its job. It was for me and my client to make the next moves, and we contacted each of the companies on the list, speaking directly to a number of them via phone or video link, before shortlisting those we needed to know more about.

But really, in my own mind the decision was almost made after my first conversation with the distributor. Considering that they had been playing ‘hard to get’, it would normally have seemed strange for them then to ask for an exclusive deal for the whole of Canada. This sent the signal that they were not only interested, but that they recognised the potential for the new products in their market sector.  After I explained that exclusivity had to be earned through performance their interest remained, and we eventually agreed a way forward. My client had no representation at all in Canada up to that point, and after a positive conversation it was agreed that we would ring fence the Province of Ontario for the new distributor to show what they could achieve over the following 12 months. At no point during our discussions did I doubt my initial gut feeling, and I was pleased that we had achieved an initial good result. 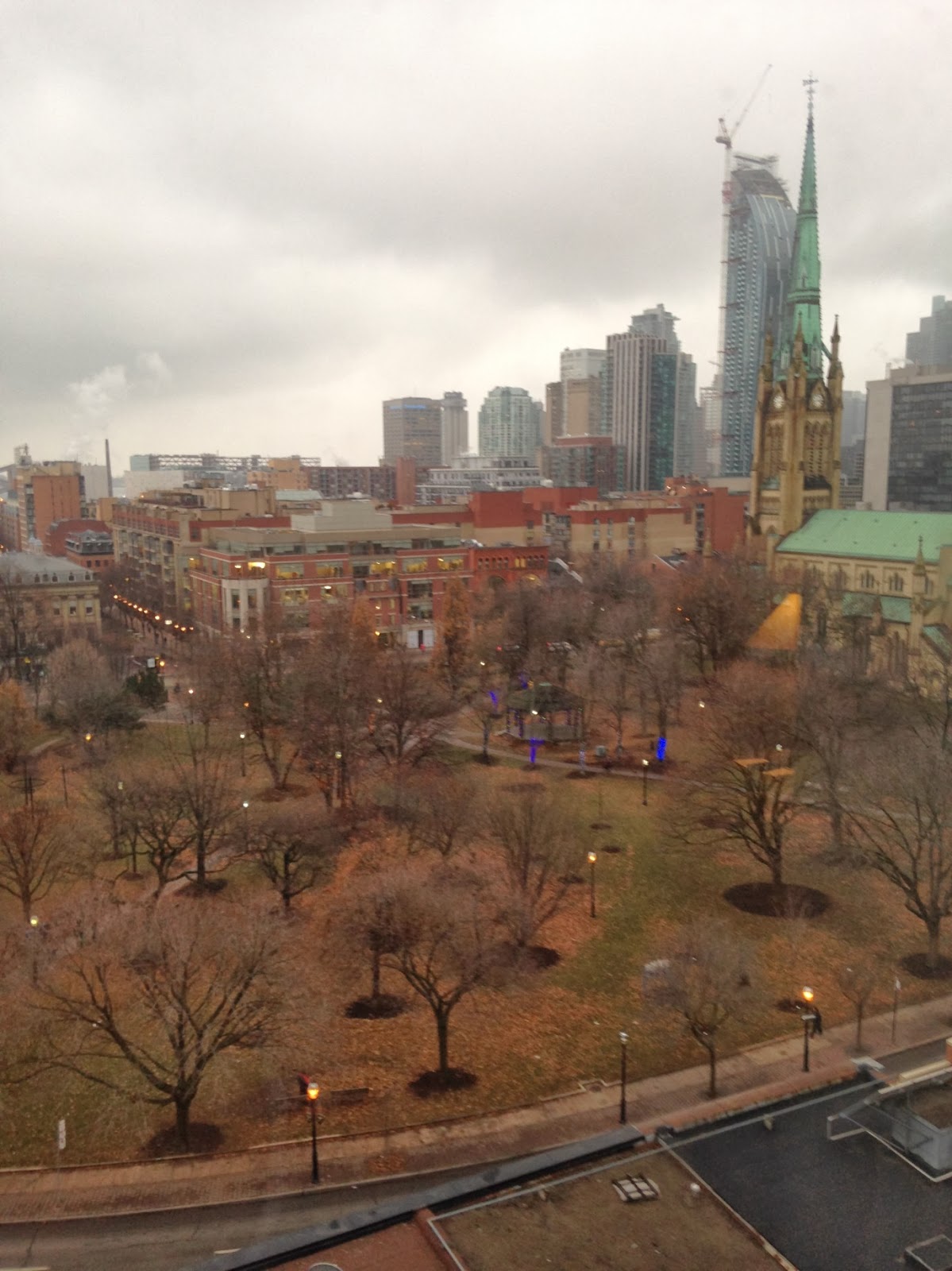 Note the word ‘initial’! I had facilitated the appointment of a distributor in an overseas country without actually having met them, without having seen their offices, without having met their customers, and without them having any kind of online presence other than email. Had my client taken that route I would probably have told them off for being rash! However, before I recommended the appointment I had spoken to their other UK principal and that gave me the confidence to move forward. I had done something similar with a company in Hong Kong for the same client some 18 months previously, and that has proven to be a good decision.

The importance of all selling is in the follow-up, and it was agreed that I should combine a visit to a major industry exhibition in Toronto in December with a few days out and about with the new distributor. They did not disappoint. In fact they car exceeded even the expectations that I had, introducing me at a high level to some of the best architectural and design practises in and around Toronto, with several agreeing to specify my client’s products before I returned to the UK.

The distributor has since placed a stock order with my client which was put on a ship during the Christmas holidays. The interest that both their direct efforts in the market, and my support for them in meeting their customers to talk about their needs, has generated a momentum on which we now need to build. It is always pleasing when you get it right, and when a gut feeling can turn out so well!
Posted by S+H LLP at 14:12 2 comments

Every business has its bad days, so it’s only fair to start by saying that Friday’s experience with KLM is my first bad experience of flying with them. My flight from Manchester to Toronto took me via Amsterdam’s Schiphol Airport, with the first leg of the journey having a flight time of about an hour, much of which was spent talking to a couple whose interesting lives took them into Iraq and Afghanistan, although on this occasion to the comparative safety of the Rugby Sevens in Dubai. After a quick and pleasant flight, I walked out into the main concourse of the airport to check my onward flight, and saw that it was to leave from Gate F6 at 13:25. I looked away momentarily for the usual paranoid double-check of my passport, driving license, wallet and other important documents, and when I looked back at the screen my flight to Toronto had been delayed until 16:00. As a seasoned traveller I am always suspicious of round numbers. For example, 16:12 would have made me feel that KLM/Delta was providing their passengers with up to date and accurate information. It’s a funny thing the human mind!

Then ‘voucher available’ appeared against the revised flight time and passengers were invited to go to the KLM desk to collect a €5.00 voucher to spend on food and drink. In the three minutes it took me to walk to the KLM desk, the flight time had changed again. Another round number, but this time two hours later than the first round number, with the flight now scheduled to leave at 18:00. By then, it was obvious that the company probably had no control over when the flight would finally leave, citing ‘technical reasons’ on which their ground staff were unable to elaborate. And all this probably meant that the ‘technical reasons’ were probably evident long before my first flight took off from Manchester, so I started to feel a bit sore and made my way to a food concession to spend my voucher, then to sit tweeting miserably about it for Schipohl’s 30 minutes of free wireless access time. I watched as two flights for Shanghai and Beijing respectively were boarded quickly and efficiently and without fuss or misinformation. And I sat and drew a picture of the scene before me, which included possibly the hairiest man I have ever seen in my life!

With the likely boarding time now being just after 17:00 I ambled down towards the gate for a change of scene at about 16:00, only to find that…you guessed it…the flight had been delayed by a further two hours to another rounded number, 20:00. Now eight hours stuck in an airport is nobody’s idea of fun, but when it is followed by a flight of eight hours or more, every ounce of humour leaves you. A firm but polite complaint achieved a further €10.00 food voucher, and a €50.00 discount from my next KLM flight, but I wanted to know what was the reason for the continuing delay, so made my way back to the desk where nobody was able to elaborate why the aircraft that had been umbilically connected to the air bridge at Gate F6 had by then been removed. ‘Technical reasons’ was all they could, or would, say.

Flight security and safety have to remain the paramount responsibilities for all airlines, so none of the passengers would have objected to a slice of honesty, such as ‘We are very sorry ladies & gentleman but the original aircraft that was going to take you to Toronto is experiencing serious technical problems therefore we are having to fly in a replacement’. That is clearly what was happening, so why not say so? Instead, we had the ‘technical reasons’ mantra, and progressively declining trust in KLM’s ground staff, and a loss of faith that our flight would eventually be allowed to leave that day. There were families with children, elderly people, and disabled people, whose pleas for an explanation and accurate time of departure were increasingly met with an eyes-down approach by weary KLM staff. For my part the delay would cause me to arrive at my hotel near Toronto Airport at around 23:00 instead of 16:00. I had a long drive to Owen Sound planned for early the next morning. Others had onward connections to flights to more distant parts of Canada.

So imagine a different scenario. An airline that on recognising they were going to have to fly in a different craft to fulfil a scheduled flight, provided an honest departure time and brief explanation of why, with maybe the option of a shuttle bus to more comfortable hotel surroundings, or maybe into the city for a few hours with rapid checking out and back in again. Far better than a few euros to spend on average, not very nutritious, and largely lukewarm airport concession food don’t you think? Hopefully by the time enough passengers put in claims for the ‘up to €600.00’ compensation that can be offered for such a day of disruption, airlines will begin to take a more pastoral and honest approach to the demands of their increasingly knowledgeable, well-travelled, and sophisticated customers. Then again, pigs might fly!
Posted by S+H LLP at 10:36 1 comments